Update on the Constitutionality of the CFPB: PHH v. CFPB 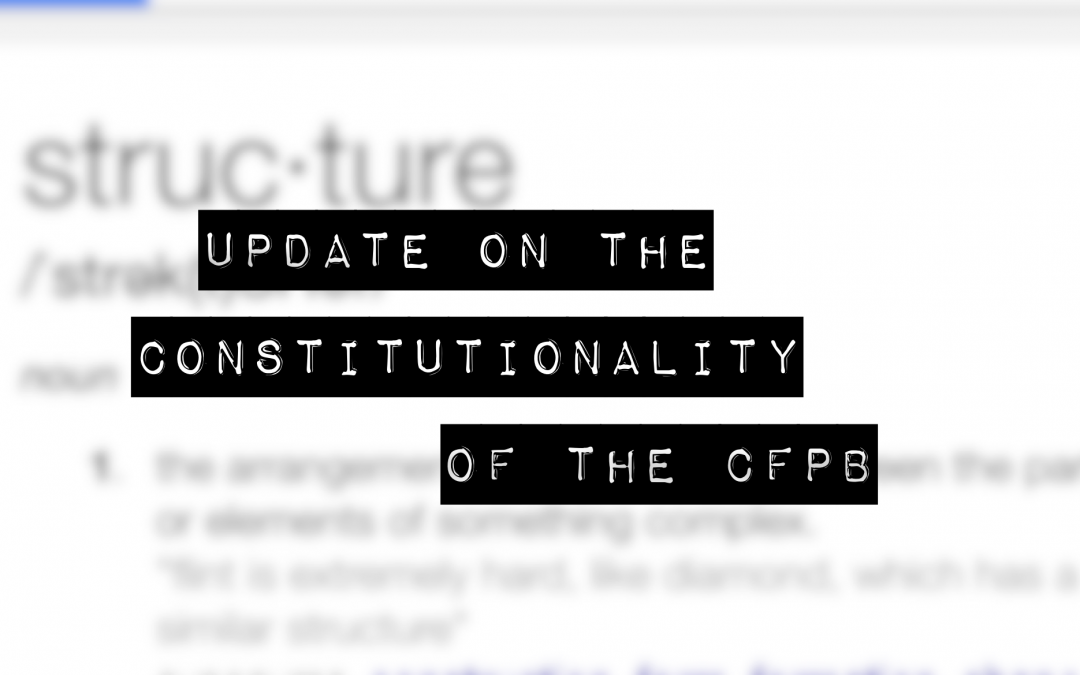 The constitutionality of the structure of the Consumer Financial Protection Bureau’s (CFPB) authority continues to be debated in Congress and federal courts. Back in October 2016, the federal circuit court in Washington, D.C. found that the single director management structure of the CFPB was unconstitutional. PHH Corporation, a mortgage lender, challenged the imposition of fines for violations of the Real Estate Settlement Procedures Act made unilaterally by the CFPB’s director, Richard Cordray, after the statute of limitations had run out.

Citing to case law a century old, the D.C. Circuit explained in its ruling that Article II of the U.S. Constitution provides the President with the authority to supervise, direct, and remove subordinate officers of the Executive Branch. While most federal agencies are overseen by a single appointee serving at the leisure of the President, a few agencies are set up as independent. Independent agencies, like the Securities and Exchange Commission and Federal Trade Commission, are led by a board, with each member providing a check on the power and authority of others. The CFPB stands alone as an independent agency headed by a single director who can only be fired for cause.

The CFPB’s single director structure allows the agency to wield enormous power. The D.C. Circuit’s opinion noted: “The CFPB’s concentration of enormous executive power in a single, unaccountable, unchecked Director not only departs from settled historical practice, but also poses a far greater risk of arbitrary decisionmaking and abuse of power, and a far greater threat to individual liberty.”

To remedy the structural flaw, the D.C. Circuit recommended that the single director serve at the leisure of the President. This will bring the agency under the purview of the Executive Branch and provide accountability for the director’s actions.

Since that decision was released by the court 6 months ago, the CFPB’s structure has become trapped in a tug-o-war between Congressional Republicans and Democrats, the new Trump Administration, and now the D.C. Circuit itself. A few weeks ago, the D.C. Circuit announced that it would rehear the case En Banc. On multiple occasions, Congressional Democrats and a number of state Attorneys General have attempted to intervene in the case, only to be summarily denied by the Court.

On the legislative front, Congressional Republicans have prepared and submitted simultaneous bills to abolish the CFPB completely, give Congress control over the agency’s budget, and completely overhaul the legislation that created the CFPB, repurposing the agency in the process.

Earlier this week, the Trump Administration filed a motion requesting the submission of an amicus brief to the court purportedly supporting the position of PHH. The brief is due in one week on March 17th and signals an abandonment of the agency’s position by the Executive Branch. While most government officials believe the agency should exist in some form or another, its structure, accountability, and authority will likely change in the coming months.