United States’ fintech funding reached a record high in 2018, rising 38% to nearly $11 billion last year, according to the latest quarterly report by PwC and CB Insights. The fintech sector not only saw an increase in funding but also an increase in the number of deals, which rose from 571 deals last year to 627 in 2018. The largest fintech deals centered on digital currency, artificial intelligence, and consumer data.

The report indicated that venture capital funding rose across the board for all sectors, increasing 30% to $99.5 billion in 2018. A big question in 2019 is whether the venture capital market will continue to rise at last year’s pace. Much of this could depend on what is happening in Washington, D.C. as a prolonged government shutdown could make investors wary.

Globally, fintech funding has done well, although it has not broken any records. In 2018, global funding for fintech firms reached $57.9 billion, a substantial increase from the $38.1 billion in 2017, and only a fraction off the $62.5 billion raised in 2015. 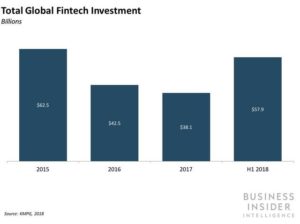